A King's Valley face in profile 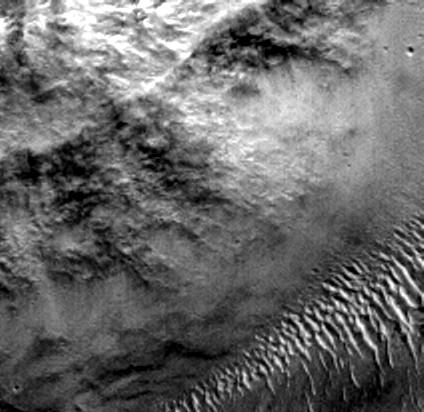 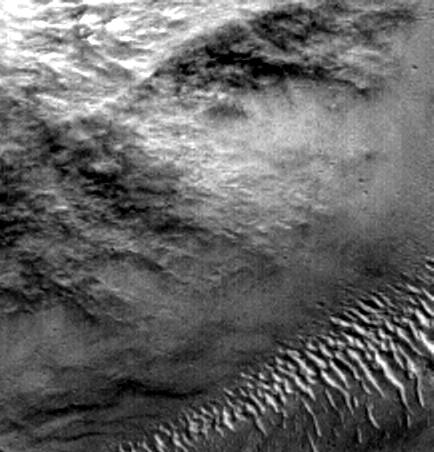 The two images have slightly different shadows which allows some of the features to be seen more clearly. Each image has been resampled to 144dpi, double the original and adjusted for brightness, contrast and intensity. There may be another face here turned away from the camera to the right. If so then this would follow the curve of the cliff face and give us some idea of the 3D shape of these faces. 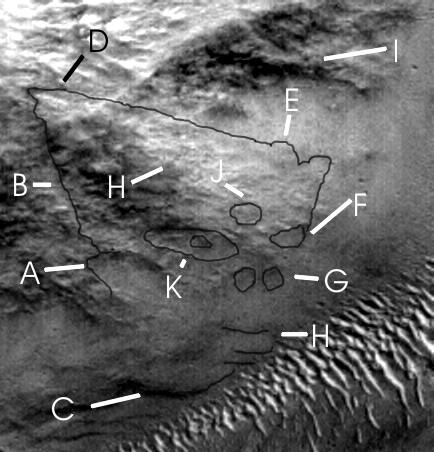 A shows this depression could be the ear of what I call the Angled Face, though the lower parts may have eroded away.

B shows a rough line which could be the edge of a crown. This would be a similar crown to the middle Crowned Face. If so it is a recurring theme.

C shows this ridge could be under the chin of the face. Also to the left there may be a neck of this face, doubling as the cheeks of the right hand Crowned Face.

D shows how the crown edge goes over the ridge forming a triangle shape. Normally the crown shape if natural would stop at this ledge rather than continue over it.

E shows a semi circular shape on the crown edge. The crown edge to the right may also be different as shown below. 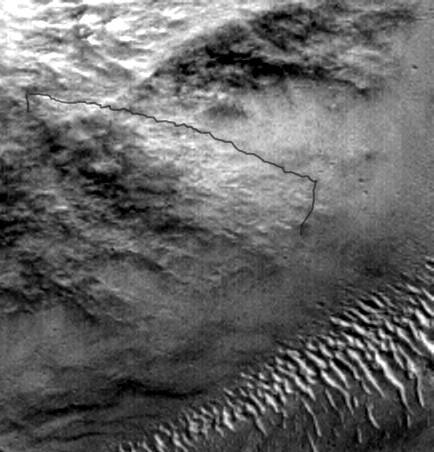 There may be another face in the series around the slope to the right or partially buried at A. The image is too vague to tell, but if the area is re imaged then it is a falsifiable prediction. 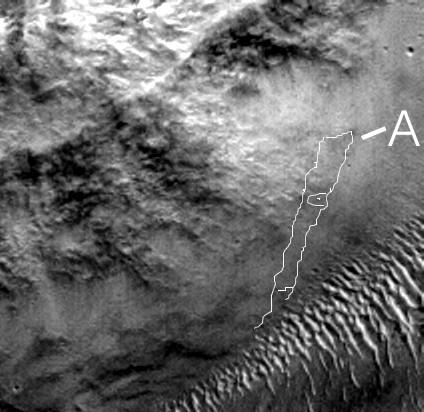 The face below is more dubious compared to the angled face, or it may be partially behind it. 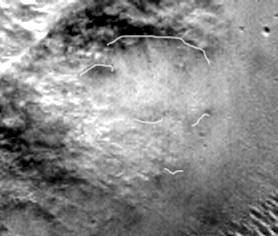 This face is also less likely to be artificial: 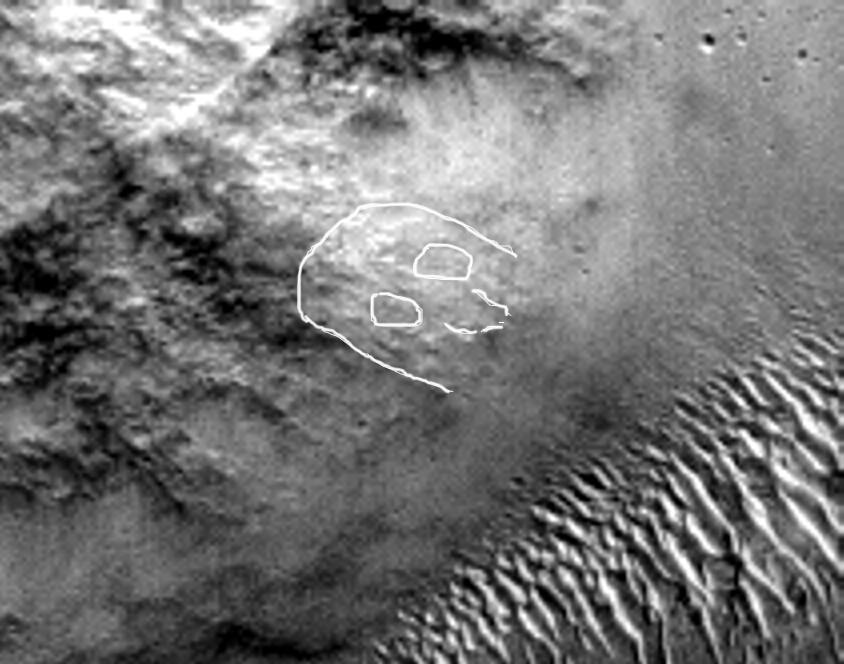 F shows a cavity in the right position for the right eye to be in proportion. There may be another eye just to the right of this, as if there was another face just around the corner, with an extended crown shape going upwards. It also allows a prediction of a clear eye and eyeball shape here if the area is re imaged from a different angle.

G shows two shapes in the right position for nostrils and a ridge of more solid rock just above them. The seem elliptical in shape consistent with the profile angle. It appears as if the rock eroded here exposing these holes, so perhaps a nose similar to on the Crowned Faces was here. If so then the nostril cavities may have gone up inside the noses on the other Crowned Faces as on a living creature. The area below this and around to the left ear may have eroded away, or the face may be wearing an armor like headdress that extends to here. The nostrils were also eyes of a face now more dubious. So this angled face replaces at least three other faces which were less clear with one with better features.

H is in the right position for the mouth and lips. The upper line might also be where the tip of the nose would be, this would make it the same kind of face as the 3 Crowned Faces. In that case the lower lines would be the mouth. The two circles at G would not have been exposed through erosion and the nose shape might have been similar to the middle Crowned Face. If you look at the top image on this page and the eyes of the  middle Crowned Face (i.e. the main Crowned Face) there are two small oval depressions. So these may be a facial feature.

I shows a ledge which may be a crown on this face: 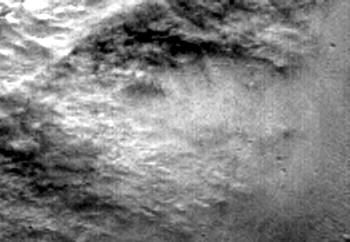 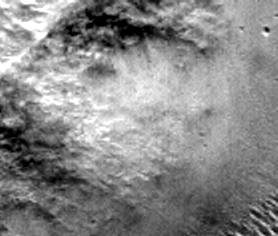 J shows a circular shape symmetrically placed on the forehead.

K shows a well developed eye similar in shape to the left eye of the Cydonia Face, the KK Face as well as the middle Crowned Face. The pupil seems to stand out in the right position for looking ahead, has a darker iris and a pupil.

The face also shows a correlation to the Profile Image or Nefertiti discovered by JP Levasseur: 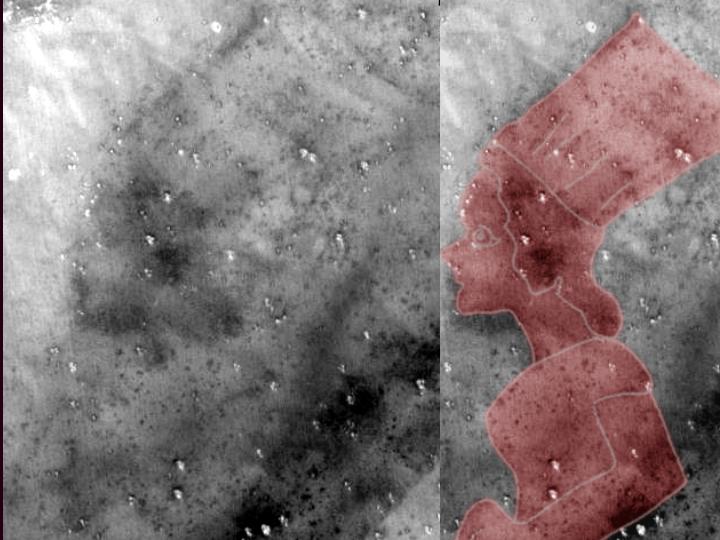 This face also has a hat shape, which while taller is similar in shape to this crown.

The face is not clearly defined, and contradicts two other smaller faces in this area. However if highly eroded this is likely to be hard to see. The face fits with the idea of the sun moving across a curved slope, exposing one face to the light, using shadows to accentuate its features then moving onto the next faces, perhaps four Crowned Faces in a row. The Angled Face is about the same size as the middle or best known Crowned Face, and has a similar shaped crown. So there is a recurring theme, just as the three other Crowned Faces, the KK Face and Cydonia Face overlay on each other with many correlations, so too here there is a similar crown.